Toki Pona is a constructed language invented by jan Sonja that has hundreds of speakers around the world. Today marks the 20th Anniversary of Toki Pona language. In celebration of the birthday of the language, the ma pona pi toki pona community had organized Toki Pona Day 2021.

As a toki pona speaker, I'm very glad to be taking part in the event as a performer, as one of the sponsors and as a participant!

As a Performer - Release of ilo nanpa lili

A month ago, I was contacted by "kala Tonyu" that I was requested to perform in "suno pi toki pona 2021" for the toki pona content that I've contributed to the internet, including ilo nanpa and the pipi song.

After some thoughts, I decided to make a sequel of the toki pona calculator, ilo nanpa lili. It's a simplified ilo nanpa that you can build on your own. It's a CD4017B-based counting device that can be built on breadboard. So I've made an assembly video, assembly instruction manual, BOM and website for the device for the event. Unlike ilo nanpa, this ilo nanpa lili is sold as a kit that the end-user would have to assemble it on their own. And it'll be sold at cost price.

The assembly video was premiered on Youtube during the event. Here's the video:

And here's the website of ilo nanpa lili that contains the BOM and shipment arrangement, so that everyone could get the kit or source the components on their own to build ilo nanpa lili.

As a Sponsor - Surprise Lucky Draw

In addition of being a performer, I was contacted by the event organizer for a request of sponsoring a unit of ilo nanpa for the event, which I gladly accepted.

Anyway, the winner of ilo nanpa in this lucky draw is jan Seno. Congratulations! I look forward to packing and sending the free unit of ilo nanpa to you!

As a Participant - The First Online Party that I've ever Participated in!

Here comes to the most important part. In addition of being a performer and a sponsor, I'm a participant of this event as well!

This event was mainly held in the ma pona pi toki pona community, which's a community resides in stupid Discord. Despite that I don't quite like Discord, I still had to join the event, so I had no choice and joined their server. :(

Unlike the toki pona communities that I've joined, this Discord community is unique in its own way. Unlike IRC and Telegram, it supports live streaming of computer screen or phone camera right inside a voicechat. This feature was heavily utilized throughout the event. In fact, this feature enabled the performances to stream the content of their screen easily for the purpose of their performance.

Apparently, the community has stricter rules compared with other toki pona communities outside as well. I've heard rumors about unjustified banning inside the community, which I couldn't confirm, but I suspect that it's true. So I acted rather cautiously inside the community for avoid breaking any of the rules during the event.

The event was also being mirrored to Youtube and Twitch. However, the viewers there seems to be treated as second-class citizens as most of the things going on were happened in Discord. Plus, there were technical issues with the mirroring in times.

Enough talking about the Discord community. Now let's talk about the content of the event.

The event's packed with performances during the 24 hours, with a few breaks. Various performances, including games, story-telling, workshops, musical performance, were available. Some of the performances were repeated for a few times during the event so that people from different timezones would be able join. In addition, there're background games going on during the entire event. The participants were asked to fill in an attendance form, which was used for the surprise lucky draw.

There're a few musical performances during the event. I've listened to music from kala pona, jan Pensa and jan Usawi. I absolutely love the song "tawa lon linja" from jan Usawi for its catchy melody!

In addition, when music's being played, I've seen people collectively posting the cat music gif repeatedly. And I've seen other kind of spamming from other occasions. Nevertheless it's fun to look at those spams. And it's even more fun to participate in it. :P

I've played three games during the event, including Gartic Phone, sketchful.io and Classicube. The rule of Gartic Phone is that a player would write a sentence in toki pona, then someone else would draw an image based on the sentence, then someone else would write another toki pona sentence based on the image. This process keeps repeating. In the end, the sentence would be completely different from the original one. Unfortunately, a few of the players couldn't speak toki pona well (notice how "jan li tawa wawa" get turned into "jan li kama wawa". In English, that'd be "a person runs" get turned into "a person becomes strong"). The less-fluent speakers made some extra content get lost in translation.

For sketchful.io, it's like post-it draw-it. But the host had loaded a custom word list that only contained toki pona words. It happened right before the closing session of the event. At first, around 20-30 players had joined the game. People began leaving before the game ended because it got overrun for a bit. At the end of the game, there were only like 8 to 10 players. With all those people leaving, I managed to win the game! :P

As for Classicube, it's a game similar to Minecraft Classic. It's one of the background events that the participants could join anytime during the event.

I'm impressed that the community had built a rather decent toki pona world during the 24 hours of the event: 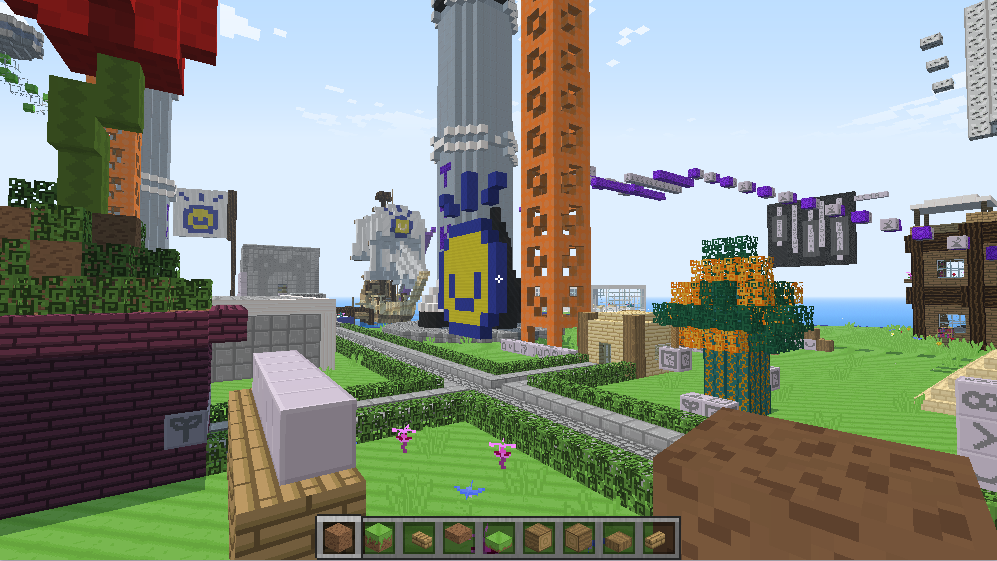 Too bad! I felt super dizzy after playing this game for a while. So I couldn't play it for long. :(

That's it for the event. I'm very glad to have joined it. See you next year! :D