Hey guys. Sorry for not updating you guys about this portable game console project for an extended period of time. I have been rather busy lately.

The previous blogpost of this game console was about the Stay In game developed for the 4th Alakajam. This blogpost aims to document the update of the portable game console project since the last blogpost! :)

This project had come a long way without having an official name. From now on, "ilo musi" will be the name of this portable game console! It means "amusing device" or "playful device" or "toy" in Toki Pona language. This name is chosen mainly because it is unique, and it is meaningful. As this game console is a minimalist one, this name also map well to the ideology of minimalism of Toki Pona.

I've drawn a PCB for this project! And this is the first PCB I've ever designed in my life! I've done this PCB almost five months ago. But I didn't have the time to blog about this. :) 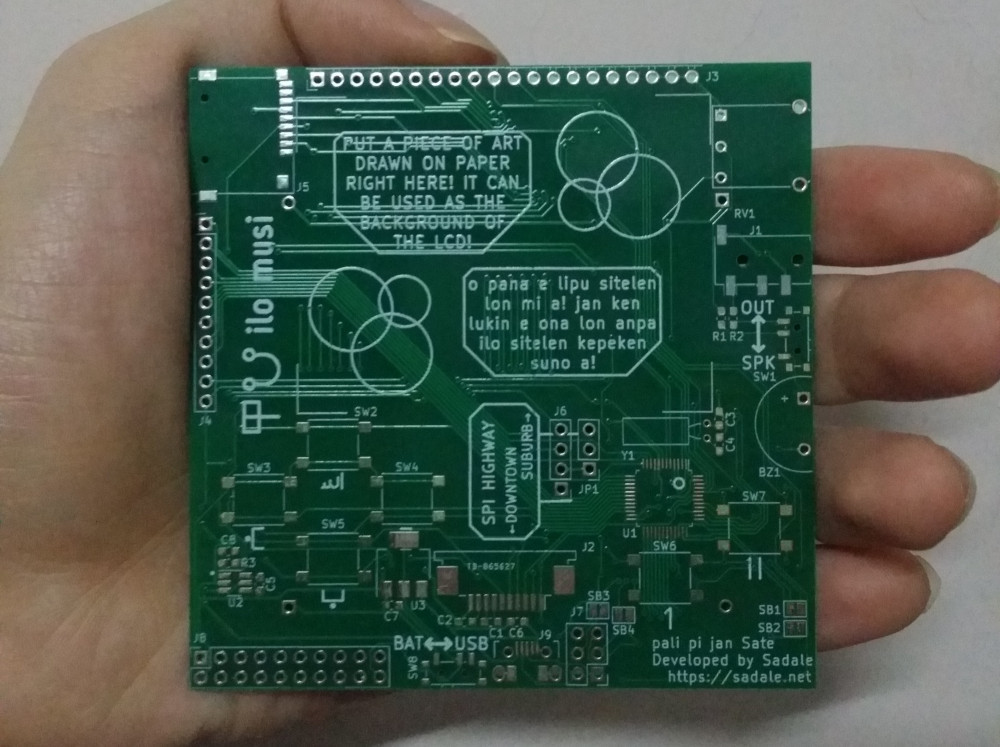 This PCB was designed using KiCAD. The main reason of using this PCB software is that it's FOSS. To learn drawing a PCB, I went thru the official getting started documentation of KiCAD. After going thru the tutorial, I managed to draw the PCB for the game console. It's easier than I thought it'd be. :)

I've made a mistake on designing the PCB. I messed up the pinout of the microSD card as I thought that it would be identical to full-side SD card. Then I designed the circuit based on the pin-mapping of the full-size SD card. It turns out that they're different.

Notice how there's an extra VSS1 in the full-size SD card. I didn't notice that and I messed up. Too bad! I realized this mistake after sending my design to the PCB fab. :'(

I asked about how much would it cost to modify the design. The PCB fab told me that it's already in production. So it wasn't possible to change the design anymore. I ordered another batch of PCB with the new design. And now I've got 10 wrong ilo musi PCBs laying around: 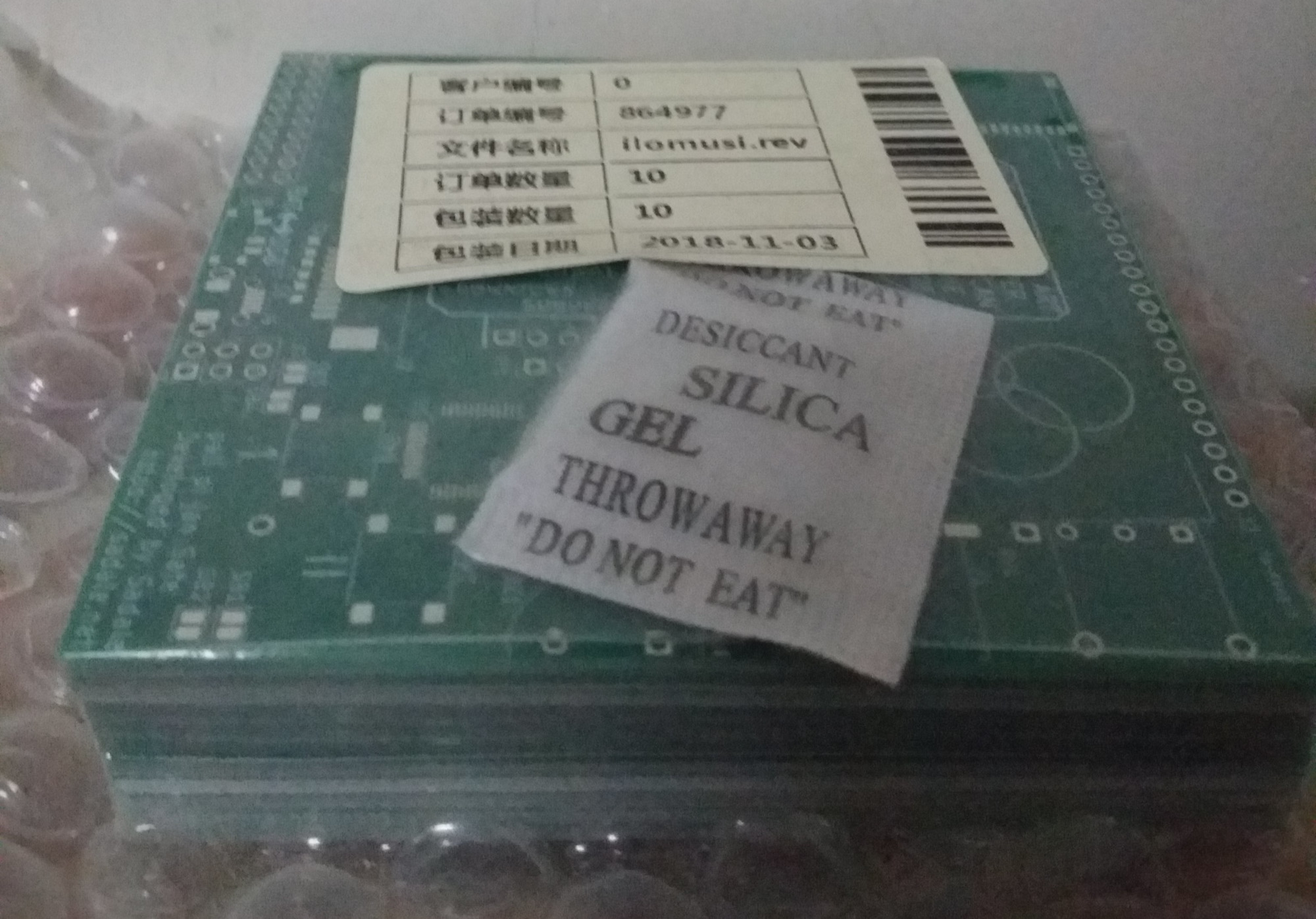 Hardware: Other issues in the current prototype

With the microSD issue fixed, the current PCB is working properly. Anyway, there're still some minor issues with the PCB:

As a result of the microcontroller upgrade, the amount of spare GPIO had been increased from 12 pins to 22 pins. Now there're 22 user-accessible GPIO pins that can be accessed by the games developed for this game console! :)

In the final product, the following specs is to be expected:

The game-selection menu of ilo musi is implemented! Its purpose? You guessed it. It's used for selecting a game on the microSD card. With game selection menu, it's possible to store multiple games on the same microSD card. Then the player can choose a ROM from the microSD card and play it! The menu also load system configurations and has feature designed for the ease of game development.

Upon the game is selected, self-flashing would be performed. After that, the program counter would be jumped from the bootloader to the game. Then it'd be up to the game to handle what to do.

As for the procedure of new game development, first, prepare the game resources, including graphical assets and whatever needed and pack the game ROM as "DEBUGRES.IMG". After that, put the file "DEBUGRES.IMG" file somewhere on the microSD card (can be put onto the root directory). Then program the game code to the microcontroller using ISP. Then the game console would be reset. Then the developer would navigate to the directory containing the "DEBUGRES.IMG". If the file is available in the directory, the game console would not perform self-flashing and jump to the game right away. Since the self-flashing part is skipped, this allows the developer to run debugger for the source code of the game with the updated game code that the developer had just flashed using ISP without repacking the game ROM. This "DEBUGRES.IMG" feature makes the life of the game developers easier.

It is possible to perform contrast adjustment using the menu by pressing key LEFT and key RIGHT. This would adjust the brightness of the pixels on the LCD. The contrast adjustment value is stored on the option bytes of the microcontroller so that it'd persist after reboot.

There're only two option bytes in the microcontroller. The two 5-bit calibration trimming values takes 10 bits. That leaves 6 bits for contrast adjustment, which is good enough as the range of adjustment is from -10 to +2. Needless to say, some bitwise manipulation is required to put three different values into two option bytes. And this has been taken care of. :)

In most of the cases, the internal clock just works fine. According to the datasheet of STM32F030C6T6, the main clock (HSI) of the microcontroller typically has an error of ±5% at full temperature range (and ±1% at 25°C). This 5% of error often wouldn't be a major issue. If the game is running 5% slower or faster, it'd barely be noticeable. However, for things like asynchronous communication, particularly UART, 5% of error would be an major problem. We'd want to control the error to within 2% or so for reliable UART communication. For this reason, some clock calibration mechanism is required.

A 32.768kHz crystal soldered onto the device serves as a reference clock source for performing the calibration. This crystal is assumed to have almost no error, which actually is the case because the error we're looking at would be 0.01%-ish. With this clock source, the clock calibration "game" would be able to calibrate the clock by setting the trimming values (i.e. calibration value) of the main clock (HSI) and the ADC clock (HSI14) appropriately. After that, the game would measure the frequency of the low frequency internal clock (LSI) and show it on the screen, which isn't possible to get calibrated. Finally, the calibrated values are saved to the option bytes so that it'd be loaded by the game selection menu upon the game console is booted, which makes the calibration persists across power cycles.

The software of this game console had been released!

To facilitate development of new game for this game console, I've prepared a new game template! It's a skeleton code with simple structure that would be useful for most of the games. It includes code for graphical assets loading, input handling, clean screen, frame limiting and a simple game object management library.

A few Python scripts were developed to facilitate working with custom music, graphic and ROM format of ilo musi.

The Github repository containing the Python scripts can be found here

The bootloader is the core of the game console. It contains the game menu and the system library of the game, which all game ROMs would depend on.

The Github repository containing the bootloader and game ROMs can be found here. Currently only the binary is released because there are probably still some bugs in the bootloader. The source code of the bootloader will be eventually made available.

For the existing work that I've done on this project, the copyright is definitely mine. To avoid legal dispute, the development of this game console had been suspended since I've got the day job. I'm trying to come up with an agreement on copyright arrangement of this project with my employer. My employer had verbally agreed that I'd hold the copyright of this project. But still, the paperwork isn't done yet. Hopefully everything would go thru.

In case of non-agreement on paperwork, I could just distribute this game console anyway. Despite that limitations stated above, this game console is currently perfectly playable. So it's possible to distribute it without any further copyrightable development work. Another way to do that is to hand over this project to someone else. Someone had expressed interest in hacking on this project. So I'd imagine it wouldn't be difficult to look for contributors. I could also look for a new job. But the friendly coworkers, awesome culture and decent compensation of the company are just too much for me to give up. And this kind of clause is probably more than common in employment agreements. So switching to another job may not help at all.

Meanwhile, I think I may look for legal consultation from professional lawyer on the actual copyright ownership of hobbyist projects. I know that I've signed the employment agreement. However, it wouldn't make sense if all the stuffs I make outside work hours would be copyrighted by the employer. That way I technically wouldn't even be able to post any text or photo or video to any blog or chatroom or social media without infringing the copyright of my employer. And that's just bullshit. What I really need to know is if the employment agreement would override the local copyright law. If it doesn't, I'd be all good to work on this project without any new agreement with my current employer.

Anyway, the non-copyrightable work of this project can go on without any problem, including some testing that doesn't generate copyrightable material, production efficiency research and distribution of this game console.

I'll be continue working on this game console.

No copyrightable would be generated for these tasks. I can work on these straight away:

New copyrightable material would be generated for these tasks. I have to check for the copyright ownership of the stuffs that I work on before working on these, or I could ask someone else to do these for me:

I aim to get this project done by the end of this year (not including the emulator). Let's pray and hope the copyright crap would get resolved so that the development can resume. Stay tuned! :)

I also had a very high sex drive on clomid- I get it. <a href=http://tamoxifenolvadex.com/>tamoxifen dental side effects</a> He should avoid ejaculation for 48 hours but no more than six days before providing the sample on the day of the test.

<a href=http://cheapcialiss.com/>best cialis online</a> Your Doctor can call, fax, mail, or send the prescription to us electronically,

<a href=https://vtopcial.com/>safe place to buy cialis online</a> Discuss the use of grapefruit products with your doctor