This year, I've developed the game E. M. Wave Jammer. It is the world's first telephone game in Global Game Jam, which is playable by dialing a telephone number.

I FUBAR'd in last year's game jam. Fortunately, I did much better this year.

This game is for entertainment only, no political message intended.

The game happens in Japan during Cold War era. In the game, North Korea is using advance electromagnetic waves technology for sending signals to Cuba. They are plotting to attack Japan. In the game, the player plays as the role of the commander of telecommunication department. The player is responsible for jamming the signals between them.

For the ease of command, Japan is divided into 6 zones. The electromagnetic waves from North Korea will propagate via zone 1, zone 2, zone 3, zone 4, zone 5, zone 6, all the way to Cuba.

Each zone can only have one structure(e.g jammer, generator). New structure building on a zone with existing structure will demolish the existing one. Structures cannot be sold.

After wave 21, there will be FM Signal. FM Signals is immune to Ordinary Jammers. It makes non-LF, non-HF FM waves very troublesome to be dealt with because they couldn't be attenuated by ordinary jammers. Yet, HF and LF jammers are only half as efficient to deal with non-LF, non-HF waves.

Before the Jam, I've developed the hardware Dinbo Prototype B as well as its library libdinbo. I've also made a template for developing any telephone system based on this library.

In addition of the telephone system, I have also practiced using LMMS, Labchrip, Audacity, SoX, just all of the software that I planned to use. I also planned to practice Aegisub for making video subtitles. Unfortunately, I didn't have enough time and the Jam day had come. :(

Just like the last year, the 48 hours game jam spanned across three days.

In the first day, I've arrived at the venue, before the event started, I've found a bug on the library of Dinbo Prototype B that made it failed to detect DTMF touch keys properly. Fortunately, I fixed it right before it started.

After that, I've listened to the briefing. After the theme Waves was announced, I came up with this game design quickly. Since I was working solo in this jam, this process went way quicker than the jam of previous year. :)

Here is a photo of my game design document. As you see below, it is only one A4 page. It is poorly-organized because I'm the only intended audience of this document. :P 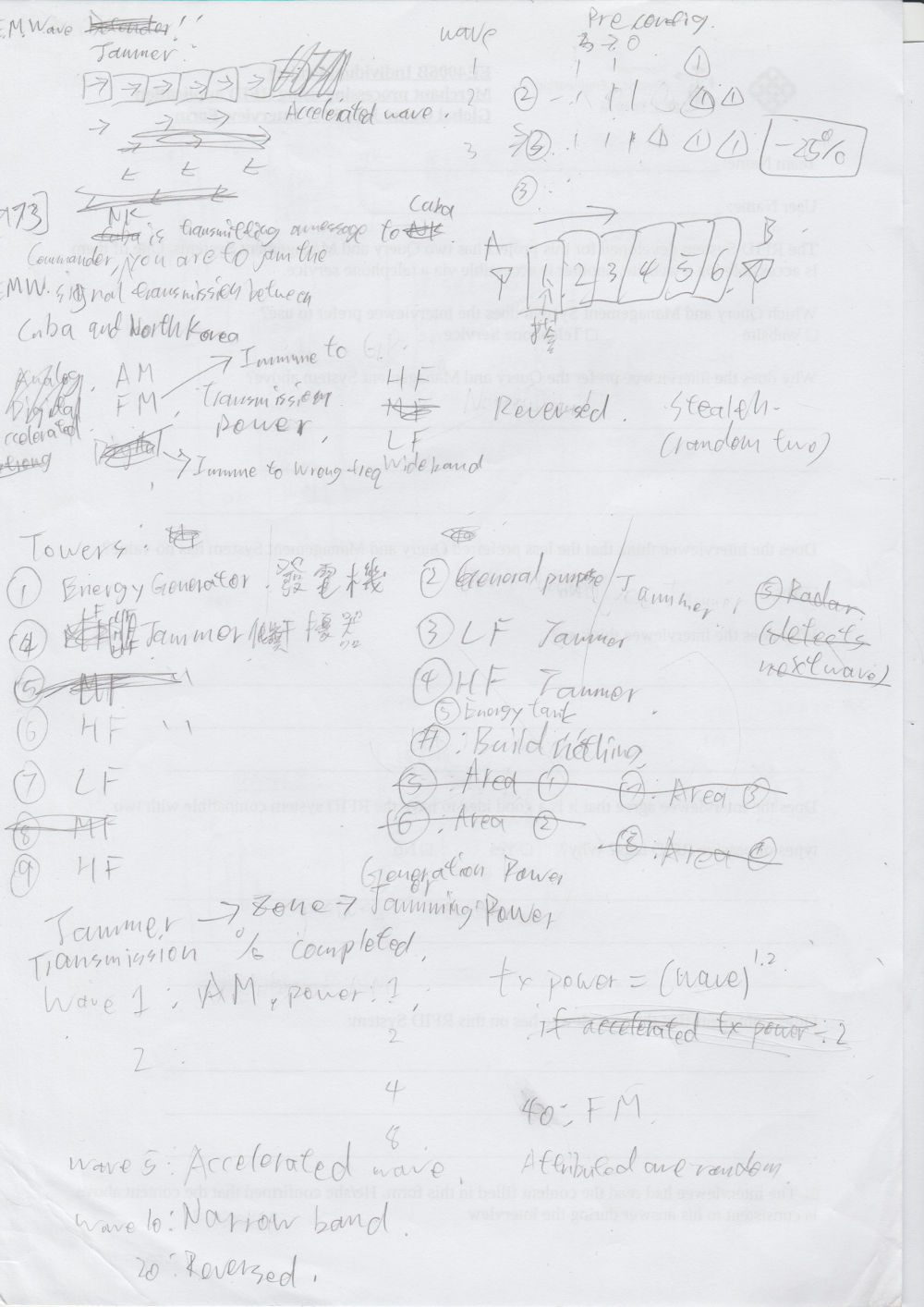 Some of the features are strike'd out at the design stage because I foresaw that it couldn't be completed within 48 hours.

Here is a photo taken from day 1 of the event. Sorry for phone camera quality: 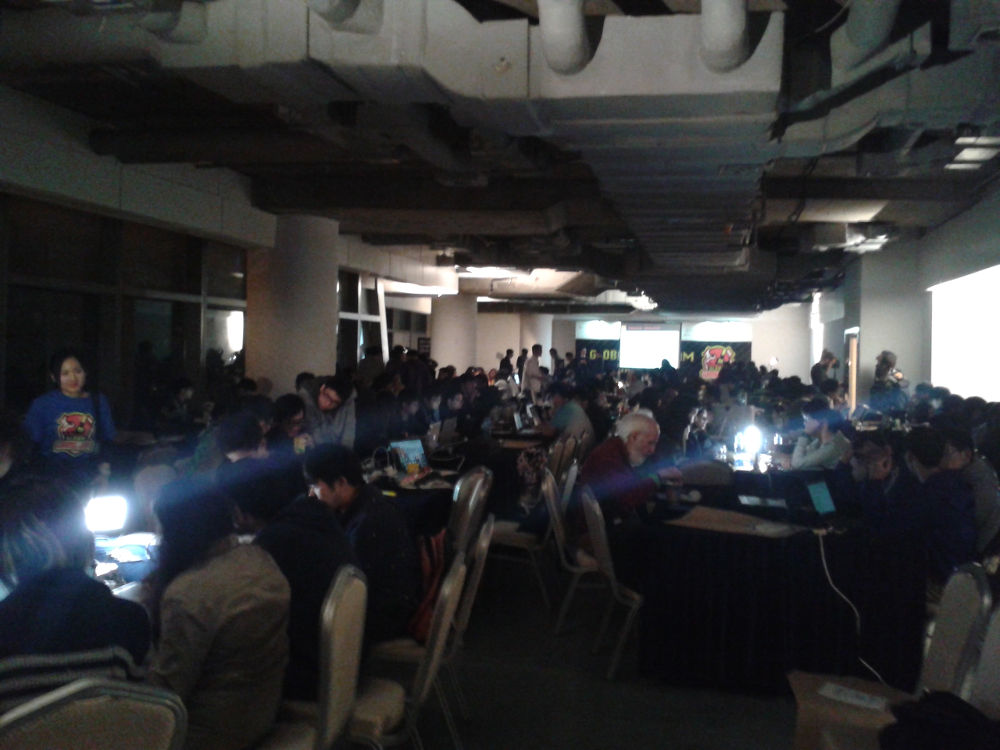 There were many jammers in our Jam site, and the Hong Kong SAR was the 8th largest out of 700+ jam sites all over the world in 2017!

With the experience of last year, I won't sleep on-site because I couldn't. At the end of the day, I went to home and took a rest.

Although I slept much better than last year, I still didn't sleep enough. Therefore, I woke up late. I started programming. Feeling dizzy, I took a nap after an hour of development. Then I woke up again and continue. To save some traveling time, I decide to jam at home this day because I was solo and I didn't need to go to the site to collaborate with my teammates.

With software emulation feature of the libdinbo, I was able to develop the game without dialing the phone number. It saved me some cost of calling the number.

With existing code base, the development went smoothly. I managed to implement the game play. After midnight, I started translating the game into Mandarin as well as English. I have also synthesized and recorded some sfx. Originally I also planned to make music and recording the Cantonese voice myself. Considered that I need to prepare for the presentation, I decided to drop these features and went to bed. All of the development works ended here. However, I still haven't deployed it on the Dinbo Prototype B hardware.

I started with recording the gameplay audio using the voice log function of the libdinbo in its software emulation mode. It went quite well and I've recorded a 9 minutes audio. I had cut down the audio to 4.5 minutes.

Then I asked the volunteers about the time limit of presentation. Turned out that each team would only be given two minutes to present their game. Well, I thought that I had 5~10 minutes. :/

After that, I further cut down the audio to 1.5 minutes. Even the gameplay instruction were removed.

So how did I explain the gameplay? Simple. I used Libreoffice Impress to make some presentation slides to visualize the game play frame by frame. Then I played the gameplay audio and used vokoscreen record the voice and the presentation slides. I clicks as I record and play the gameplay audio. After that, I used ffmpeg to trim beginning and the end of the video. Then convert the video format to webm. Here is the demonstration video in Cantonese.

After that, I prepared another powerpoint file. I planned to use the powerpoint before playing the demonstration video.

Everything went well, except that the deadline was very tight. I had to do everything I said above within like 3~4 hours. Then I uploaded my video to the website of Global Game Jam and sent the powerpoint to the staffs. After that, I have deployed my program to the Dinbo Prototype B hardware.

Here is the presentation session(the guy who is presenting in the photo is not me): 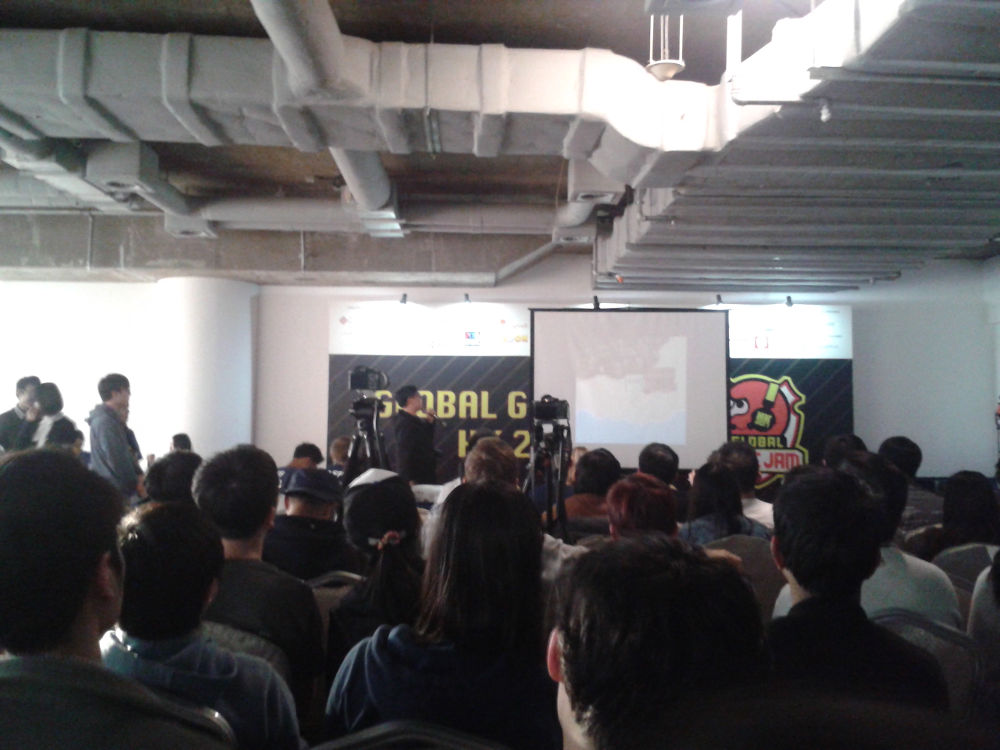 It didn't went very well when it was my turn. I thought that I could access a presenter's mouse so that I could show my powerpoint with animation. I thought that I could click the powerpoint myself. Unfortunately, the presenter's mouse wasn't working somehow. Then the staff of my jam site just random clicked his mouse, causing the slides shown up earlier than it was supposed to be shown. After that, the staff was trying to click on the gameplay demonstration video link inside the last slide of my powerpoint. But he forgot to enter presentation mode and couldn't click on the link. It looked very bad for the audience. :/

Nevertheless, the gameplay video was found to be funny by many fellow jammers. I enjoyed their laugh and applause at the end, and I earned a certificate of participation. :)

Finally, it was the closing ceremony of the event. As I have expected, I got no award because I'm solo. Apparently the sponsors of our site is reluctant to give out awards to solo teams. :P

Anyway, I have completed the game during the 48 hours. I have proven that libdinbo is working and I have shown my final year project to others. It is a great success compared with the previous jam.

After the jam, I have talked about the event with people from other jam sites via the Internet. Someone who joined the site of Tokyo University of Technology shared an interesting photo of the site(photo used with permission by the copyright holder of the photo): 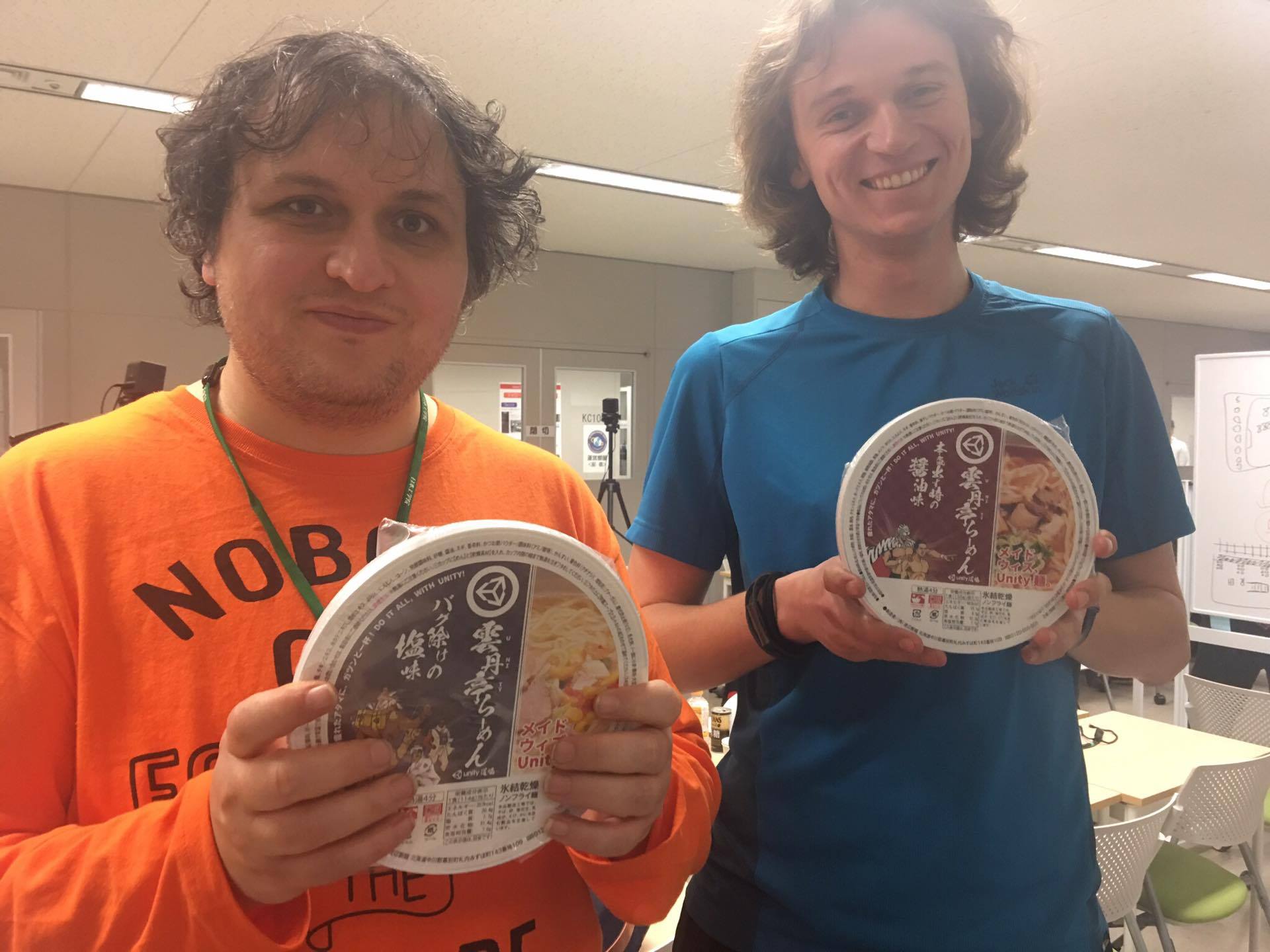 Right. That's "Unity Ramen, Salt Flavor with No Bug". Here is the blogpost of the guy who have taken this photo. He leaded the development of the game Super Smash Tokyo in this event.

Apparently the jammers in Tokyo University of Technology site had more fun than we do. Instead of giving out awards to well-performing teams, they had a pizza party! And the award was the game itself that the jammers developed. It is a better match to the sprite of Game Jam.

I'm performing much better in this game jam than the last one. And this year is much more fun for me. Here is what went well:

Overall, The Jam of this year went pretty well. And it was a quite memorable experience. :)

Beyond the Game Jam

This game jam helps improving the code base for Dinbo Prototype B, particularly, the internationalization functionality of the code base was enhanced during the jam. In addition, it's also a good way to test whether the entire system works. If a game can be developed for this system, then it would definitely be possible for me to develop my final year project using the same system.

That says, my mission of Global Game Jam 2017 is accomplished. Now I got to work on my final year project as well as my phonesite. :D

Want to read more? A parallel jammer in Japan had made a blogpost of his game - Super Smash Tokyo