Public domain assets pack of the game available at the end of this blogpost!

So I've released a crappy game to the internet. You may be curious about how is the game made. If you are, you probably want to read this blogpost. :3

Note: This game is for entertainment purpose only. No political message intended

The graphic is done with Inkscape.

As you may have known, this game is based on my Ludum Dare 33 Entry. Most of the development time are spent on graphical improvement. This section is about the analysis of the graphical changes.

Poopie is the main character of the game. The left one is the original Poopie. The right one is the current one.

I've experimented it around for a while before I come up with the current design:

Compared with the original design, the current design has eyes inclined. The eyes also has eyeball in it.

The shading consists of two elements. First is that in somewhere above the center of the object, a radial gradient is used to make there a bit brighter. This can make the object looks spherical. Second is the bottom of the object is shaded with a darker color. This reproduce the reflection and diffusion property of feather skin.

The shape of the wing is inspired by(a.k.a. stolen from) the number 3 wing from the tutorial here.

We got three victims. You probably expected that. The green clothed victim is weaker. The worker victim is stronger because he got a hard hat. Kim Jong Un is the strongest because he's a leader. And for each victim except Kim, their appearance are different after getting pooped.

The first head on the pic is the older version(never released to the public) of the head of green victim. After drawing that, I found that it doesn't look right. Especially the hair. It's just weird. Then I realize that the boundary of the hair shouldn't overlap the one of the head.

To fix it, I scaled the hair to a larger size. In addition of this, I have deformed the head a bit because human head usually isn't a perfect circle. 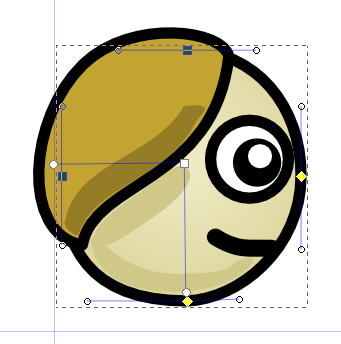 Notice the bottom node. Its left handle is longer so that the head is deformed.

To make the head looks more 3D-ish. I've shaded the following elements of the head:

And that's it for the head of the green worker. A possible improvement is to increase the saturation of the head. It's because it looks too grey.

The worker head is just a recolored variant of green victim. I use black color because the workers are usually exposed under the sun for a long time. Therefore, their skin are usually darker than usual. In addition, using black skin can give the game more diversity. That's why a darker skin is used.

To make it looks even better, I've drawn a hard hat for the worker:

Similar to the head, the hard hat is shaded. But the top spherical part of the hat shaded bright on the top instead of shaded dark in the bottom. It's because hard hat is made of plastic. Shading it up bright can make a material looks like plastic.

In the plane part of the hat, it's shaded bright on the top for the same reason. And it's shaded dark at the bottom so that it can shows the thickness of the edge of hat.

For the head of Kim, it's based on the previous version of the game, which is based on this pic.

The shape is easy. Just embed the pic into Inkscape. Then use path tool to draw the outline of the head. And that's it. The difference between two version is that the new version is shaded. If you observe the pic carefully, you would found that his hair is semi-transparent on the boundary in the new version. Another difference is that Kim is smiling in the new version because it looks more like him when he's smiling.

The shape of the body is a slightly deformed rounded rectangle. 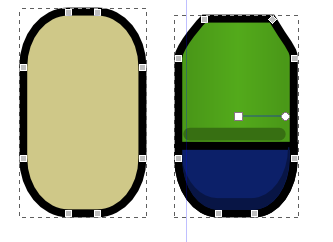 By cloning the deformed shape and using the "Difference" function, the bottom part of the body can be colored differently so that it looks like blue trousers when it is viewed together with his legs.

The shading is just using similar technique I mentioned before. It's gradient and dark shade at the bottom.

For the body of worker, it's more grey to reassemble the dirts in the construction site. The color of the clothes of Kim is just like the color of his clothes when he appears in the public. And Kim is a bit fatter because he is the boss in the game. Being a bit fat makes him looks stronger.

After adding neck, arms and legs and some tedious animation made frame-by-frame, here is how does the victim looks like:

To makes it looks better, a variant of victim after being pooped on is also made:

Maybe it isn't very good. But it's already much better than the original version:

The shape of the police car is done by referring a few police car images from Google Image Search. For the shading, I just use similar technique as stated above for shading the police car. Except the windows. It has some translucent diagonal lines so that it looks like glares.

The size of the text "POLICE" is reduced because it can increase the area of the paint surface exposed to the viewer. It makes the shading of the paint looks better.

For both black clouds and white clouds, four variants are drawn. A random white/black cloud graphic is used whenever a in-game cloud is spawned. It's because the game has a lot of clouds. It would looks dull if every single cloud are identical.

It's rather simple to shape the clouds. Just use multiple ellipse and stack them together. Then Union it in Inkscape. Behold a cloud before union operation: 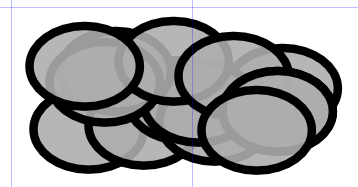 After unioning them, draw a tiny straight line. Then make it a curve by dragging it using path tool. Then make a few variants of it and put it into the cloud. Finally, shade it dark at the bottom. That's how the cloud is made.

Comparing with the original cloud, the new one is much better! :)

Obviously, the top row is the original upgrade buttons. The bottom row is the new one.

Not much to say about upgrade buttons. The new one just added shading. And I've changed the icon of flying speed upgrade. 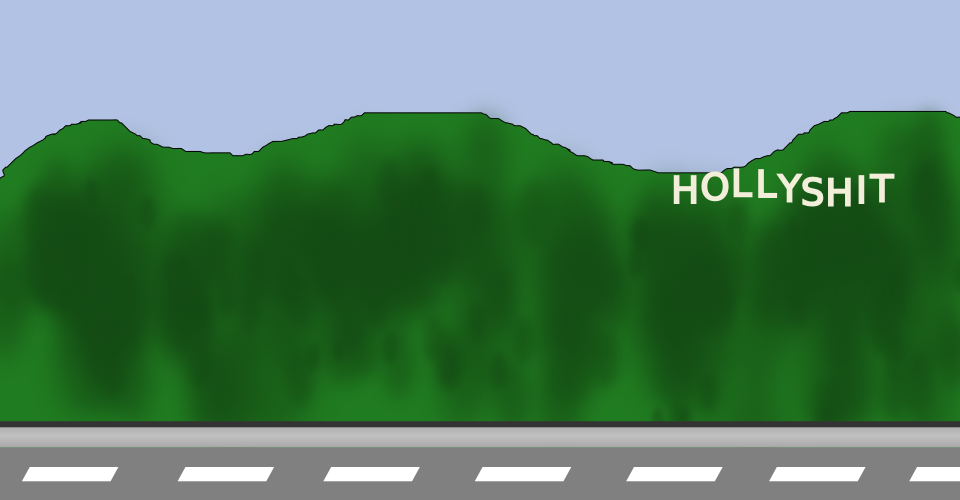 And here's the new background image: 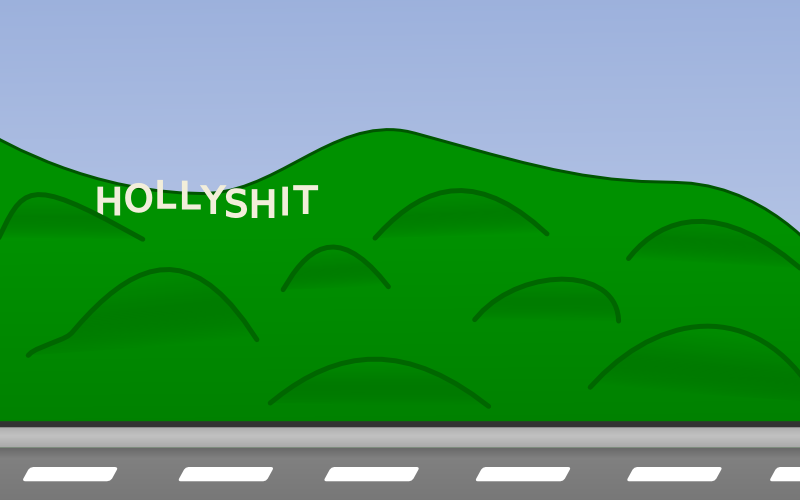 The main changes is that in the old one, I used pencil tool to create the outline of the mountain. It looks ugly like mspaint art. That's why I used a deformed rectangle for the mountain in the new one. It looks much better. :)

And finally, the win scene shown after winning the game! The original one comes first: 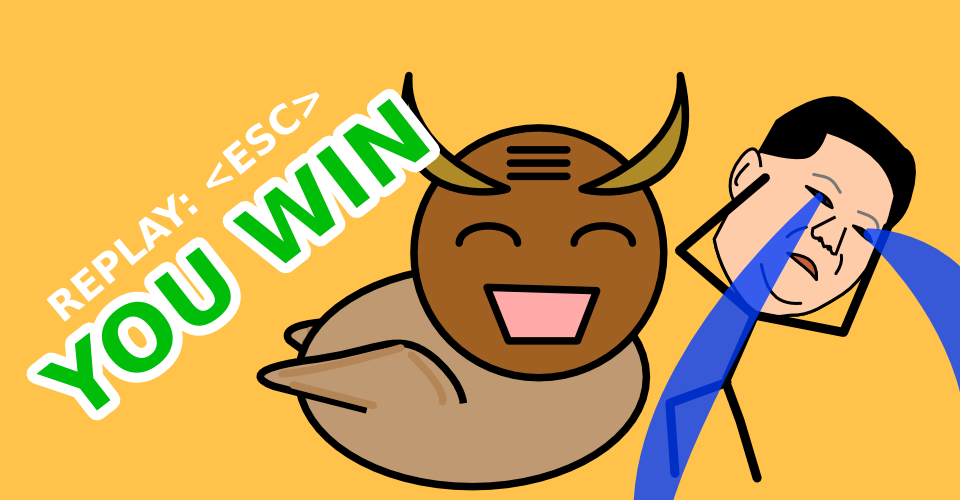 Behold the new one: 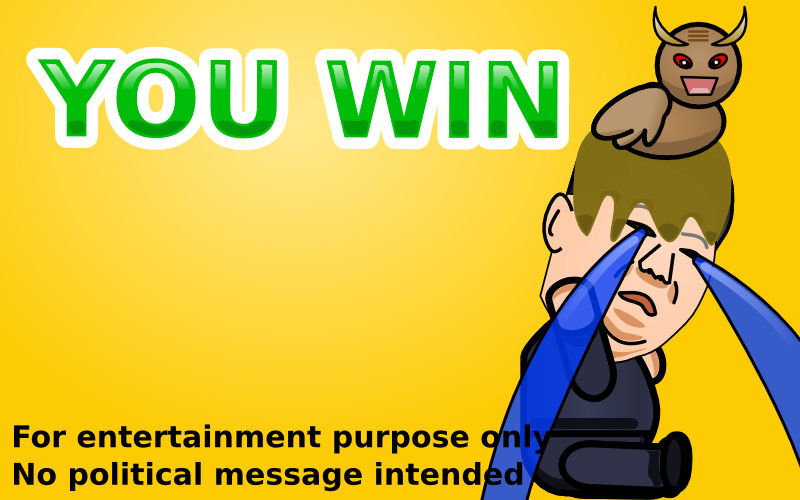 The new one is better because it looks more funny. Poopie literally makes Kim a shithead(for entertainment purpose only, no political message intended).

A few graphic enhancement was also done. It includes the text "You Win". The new one is shaded like that it's made of glass. The tear steam also has a little bit shading. And most importantly, the new Kim looks much better than the stick man Kim.

The empty space in the new win scene has a few buttons(twitter, facebook, Sadale.net and replay) in the real game.

And that's it for the Graphic part!

The poop sound was made, uh, manually. I voice acted the poop with my mouth xD. And I used Audacity to do the processing like amplification and removing the silent part of the sound. 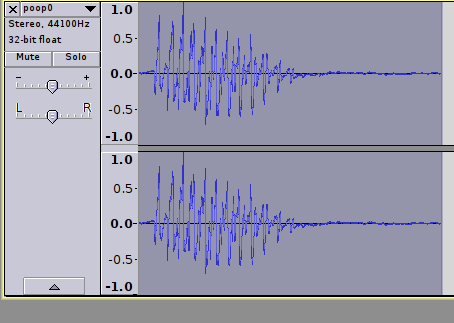 The poop sounds was recorded by a headset comes with my phone. Maybe I'll buy a better one some day later :P. Four variants of poop sounds were made. Whenever Poopie poops, a random poop sound is played.

The siren was made with LMMS(I'm proud to have briefly contributed to the development of this project!). It doesn't sound very good. But still, it just works. And it isn't a very important element of the game. Behold screenshot of making siren sound effect. 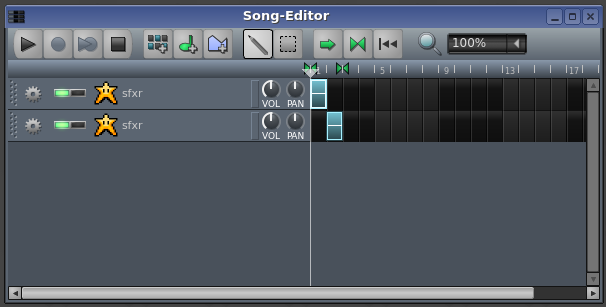 As you see, the siren sound is made with sfxr synth(I ported sfxr to LMMS!). One track for pitch rise. Another track for pitch drop. Combing them and exporting it as seamless audio. Then I get siren sfx.

All other sound effects are made with sfxr. It's pretty useful for making 8-bit sound effects. And it's very easy to use. Here's a screenshot of sfxr: 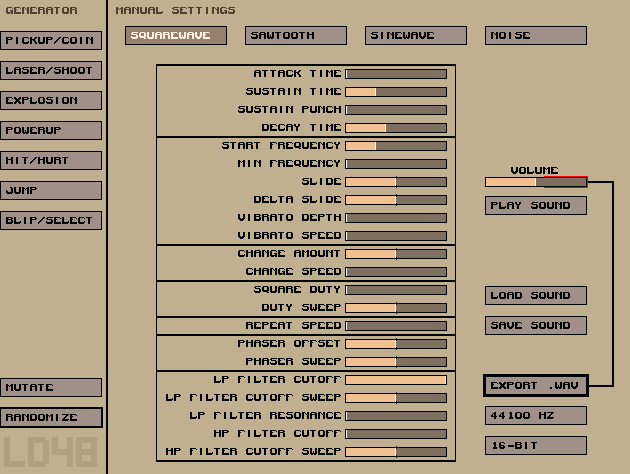 The programming of the game is done by using Java programming language with the engine libgdx. The IDE I used was Eclipse. And the build system I used was Gradle.

Libgdx is a pretty good game development engine. The award-winning Android game I made 大團完(Not released to be public) was the first game I used this engine. And it is the preceder the game Fall in Love. One of the very attractive feature of this engine is that it is capable for exporting games to HTML5, iOS as well as desktop(as a .jar executable). That's why I'm using this engine.

Still, one of the flaw of this engine is that its HTML5 support isn't perfect. The main issues that I found was the loading screen. The bright spot in the loading screen was for the logo of libgdx. While I can figure out how to replace the logo, I couldn't figure out how to remove the bright spot at the moment. Another issue is that the sound playback is lazy-loaded. The sound isn't loaded until it's played and it causes delay of sound playback in the first play. There are probably some workaround, tho. I'm just too lazy to find it at the moment :P. Maybe I'll try HaxeFlixel some time later. Mainly because it has better web support(with flash).

Interestingly, programming didn't take much time of the development of the game. The time spent on this game is Graphic > Programming > Sound effects. This is my first project that Graphic takes more times than Programming. It's probably because I decided to dedicate more time on the graphic for this game and hopefully it can make the game looks better.

Here's the assets pack of the game. It's released in public domain. You can do whatever you want with this assets pack. While it isn't a requirement, attribution is appreciated.

You can play it here: HTML5 | Android

Once again, this game is for entertainment purpose only. No political message intended. No real Kim is harmed during the production of this game.

nice insights into game development. a lot of work put into it

i'm proud to brag that i've won the game :D