Behold my first song ever released publicly: "The Lyrics of This Song are Weird". This song is about the suckiness of the song and its lyrics.

I made the song (including the vocal and the video) on my own. It took me more than a month to produce it. If you enjoyed the song, please give the video a like, subscribe to my Youtube channel and share it with others. If the reception of this song is good, I'll spend more time to compose similar songs in the future. Thank you very much! :)

I learned music composition for game development. Since a few years ago, I compose Cantonese songs approximately once a year. This song is the third song that I've made. I didn't release the previous two songs because the quality were too bad. This one isn't good. It isn't that bad either. That's why I decided to release it.

In total, 8 software applications were used for this project. They are LMMS, Audacity, ProjectM, SimpleScreenRecorder, Inkscape, Spriter Pro, Aegisub and FFmpeg. Except Spriter Pro, all of them are FOSS software.

This music was composed with LMMS. It's a music composition software designed for making music from scratch. I had briefly contributed to its development a few years ago. The voice was recorded and processed using Audacity. Some audio engineering was performed for the vocal track.

The procedure of composing this song is shown below:

I haven't formally learned music composition. If I have used the wordings above incorrectly, do tell me. I will fix them. Please notice that it is not the universal solution of music production. I have tried out other approaches in my other songs. The steps above is just what I did for making this specific song.

Here's a screenshot of the song being edited in LMMS: 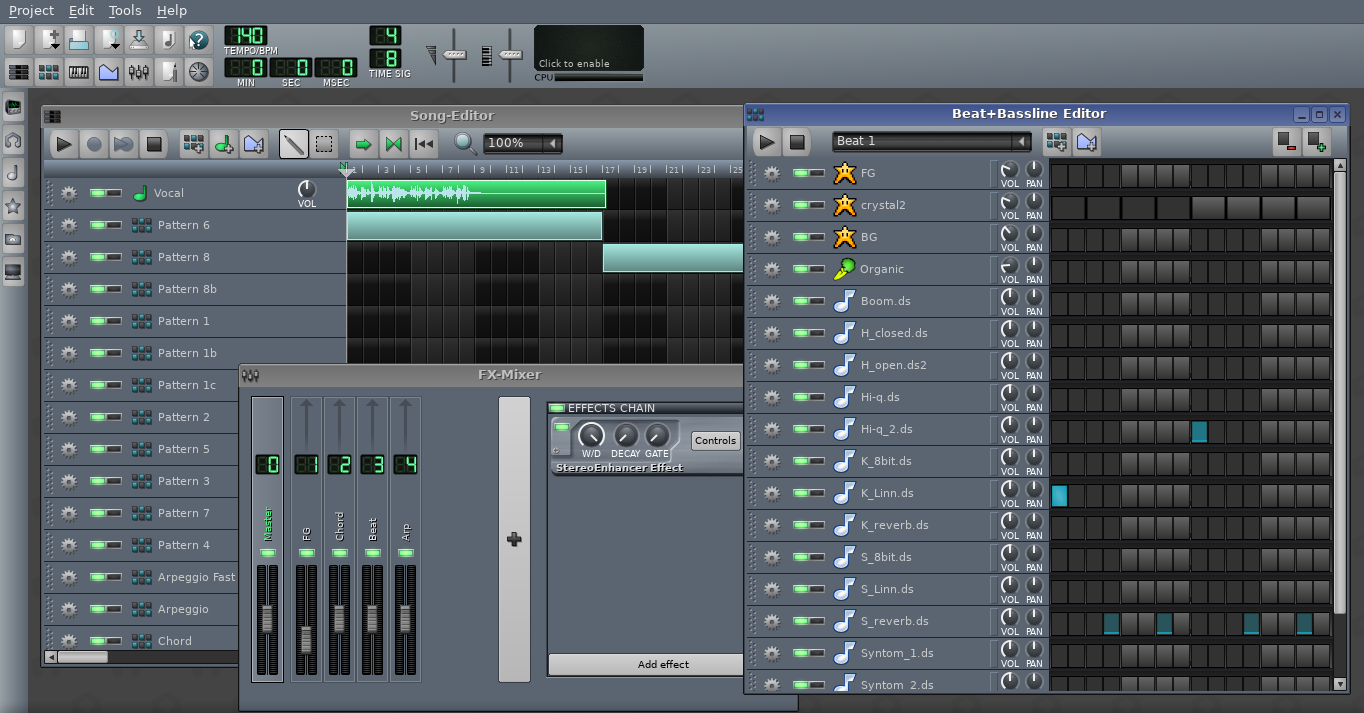 Since Cantonese is a tonal language, I have to match the pitch of the melody notes with the tone of the Cantonese characters. Therefore, it's very tough to compose a Cantonese song as it's difficult to find the right word that has both the correct tone and the correct meaning. I was stuck in the midway while I was writing the lyrics.

Therefore, I had developed a tool to do this for me. The tool was written in Python. By using three Chinese word databases that I found on the internet, combined with the tone of the word suggested by Chinese Character Database: With Word-formations (which I had further modified manually because some of the tones were changed in the modern Cantonese we're using today), a list of words with matching tones is generated: 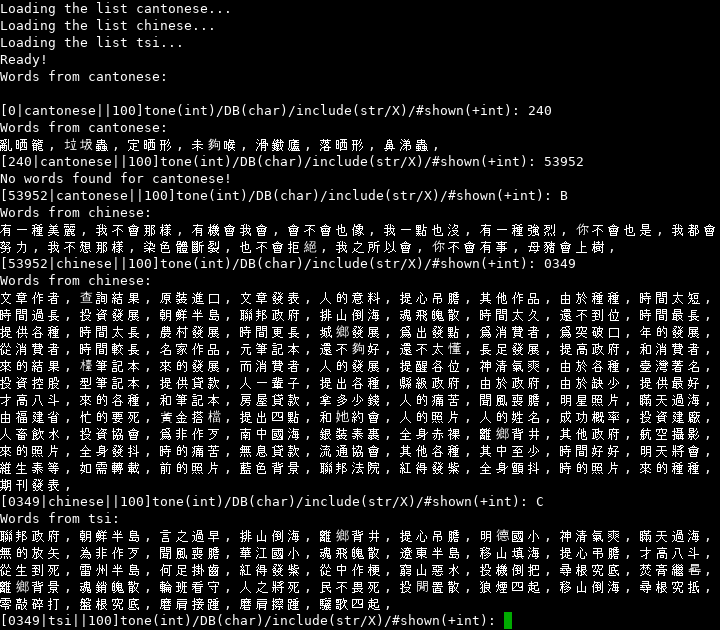 As shown on the screenshot above, the tool lists out all matching words that it found (with some minor errors). For example, if I type "240" (二四零), the first character of the word has to match the tone of 二, the second character must match 四, and the third character must match 零. The filtered result of the words is displayed, which includes "亂晒籠, 垃圾蟲, 定晒形, 未夠喉, 滑鐵廬, 落晒形, 鼻涕蟲" in the Chinese word database of Cantonese.

Database selection is also supported. The current version of this tool supports Cantonese, Chinese and Taiwan-style Chinese. This tool helped a lot while I was writing the lyrics for this song. Although I did not exclusively use this tool for writing all of the lyrics, it was very useful for brainstorming and finding Four-characters Chinese Idioms that match the tone that I want. I will probably continue to use this tool for my future songs.

Unfortunately, due to the unknown license of some Chinese words databases, I could not release this tool publicly. I'm sorry about that.

After the voice was recorded according to the lyrics written, Audacity were used for audio engineering. The image below shows how did I change the length of the Cantonese character that I had sung. By duplicating the highlighted part, the duration of that character is extended. Conversely, by deleting that part, the duration is reduced. This process was repeated for synchronizing my voice with the melody. 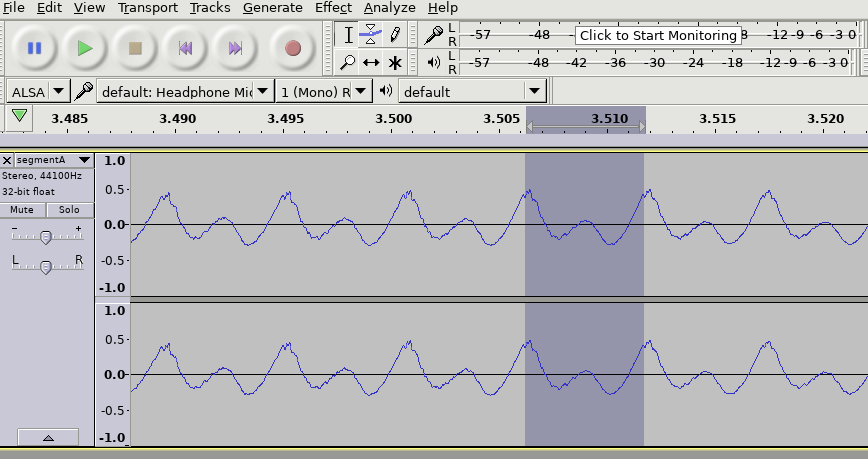 After that, the vocal track generated by Audacity was imported into the LMMS project. Finally, the song was generated by LMMS.

After the completion of the song itself, a video for this song was produced.

The image of the banner was created using Inkscape. After that, it was animated using Spriter Pro. Image sequences of the animation were generated. The subtitles editor used for the video of this project was Aegisub. With this software, a subtitles file were generated. An extra image were drawn with Inkscape for the end scene that asks the viewer to subscribe my channel. Finally, the audio outputted by LMMS, the visualization of the audio, the banner image sequence and the subtitles were combined by using FFmpeg. That's it!

希望你會鐘意啦! | Hope you enjoyed it!

I'm rather new in song production. More than a month of work was spent on producing this song. If you enjoyed it, please take a moment to share it. Similar songs will be produced if the reception of this one is good. Thank you very much! :)

In addition, future collaboration is welcomed. Feel free to drop me a line by using the email address on this website.